In November I talked about the concepts of detoxifying, healing, building and maintaining being the four principles I teach at Learn, Eat, & Be Well – Southwest France, because these are the different phases in which the body functions during it’s lifecycle.  In this article, I will introduce you to the last two diets:  building and maintaining.

Today’s version of the Paleo diet falls far from the tree of the diet of a paleolithic human.  In fact, this is one of the distinctions made in Day 4 of Learn, Eat, & Be Well.  Recognizing that a building diet needs at least a palm size piece of protein, three times per day, this was rarely the case for paleolithic man. The “building blocks” of the body are amino acids and, therefore, it should be no surprise that a building diet would be plentiful in amino acids.  Amino acids are critical because they make proteins and proteins make up the structure of all life.  When we eat protein, the body breaks it down into amino acids and then uses these amino acids to build anything it needs.

The maintenance diet, my favorite, is one that is used long-term.  It can be used by anyone during a time when they do not have any specific demands their body or mind.  This is where the Mediterranean diet comes in and this is where the French Paradox shines.  The French Paradox holds many mysteries that are explained in Learn, Eat, & Be Well.  This diet embraces all food groups and the 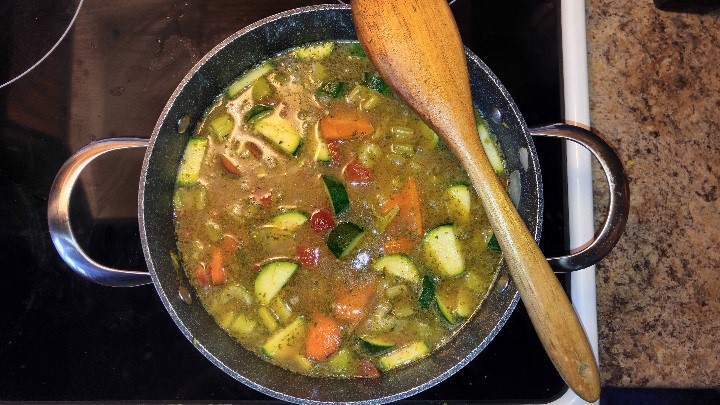 concept of moderation in a way that no other diet does.  It recognizes that we are human and that we all want to enjoy the pleasure of wine, chocolate, and bread, that most diets say one should never eat.  How do the French eat everything they want and still avoid cardiovascular disease?  Come to Southwest France and Learn, Eat, & Be well and you will not only learn the concepts but also taste the food that has made the Black Perigord the best region in France for food.  The Black Perigord has rich soil, that produces foods that are live, natural, and superior quality.  It is impossible to describe, you must taste it for yourself.

The photos in this article were today’s paleo breakfast, eggs with spinach, and my soup for the week, a Mediterranean favourite, minestrone.